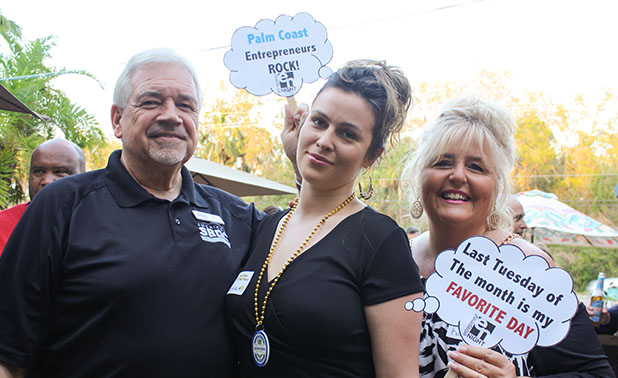 It’s Monday and Shelley, your coworker, pulls you aside.

There’s a secret ice cream cake in the freezer, hidden behind a bag of frozen peas and carrots. It’s for Bill–your sometimes crotchety  boss. He’s been grumpy lately, but maybe it’s because he was nervous about passing over the hump–“the big 5-0.” 😮

Don’t deny that you feel a lilt in your heart for Bill.

Or maybe you’re one of those entrepreneurs who’s worked entirely for yourself and can’t relate. Maybe finding a $50 bill floating around the parking lot, while you’re filling up your car, is a better example. Well, no. An unexpected $50 is way better than your boss’s birthday. There’s really no comparison there.

Maybe the best example for this theoretic exercise is those feelings that well up when you’re walking Sparky one morning and learn that the Davidsons, the lovely couple down the street, are celebrating their 50th anniversary…What a miraculous occasion!

You get the idea. Three different examples, three similar reactions (albeit, a more enthusiastic one to example two). The point being that the number 50, on its face, carries major oomph. And, at minimum 50 percent of the time, it comes with a party.

And yes, that last example is much closer to what we’re getting at, as February marked our 50th Entrepreneur Night, a major anniversary, which we hosted at the Hammock Wine and Cheese.

Now granted, we don’t yet have 50 years under our belt like the Davidsons. (Our first event came on the last Tuesday of September, 2011), so we’re at only about five-and-a-half years. But heck, have you watched the news lately? With the way the world is shaping up at the moment, who can say that enterprising humanoids will still be around in the ‘2050s–so we’ll probably continue using the number of events as a measuring stick for the time being.

Consider this a not so subtle call to productivity. We don’t wear “Empowering Entrepreneurs” badges for nothing. 🙂

Why’d we go with the Hammock Wine and Cheese for such a milestone? It’s an interesting choice. If you’re following your GPS and taking the toll bridge from Palm Coast Parkway, you soon find yourself in an out-of-the-way locale that doesn’t exactly bring to mind entrepreneurship: Dirt roads and tall trees sagging under Spanish Moss–the dappled late afternoon light filtering through, making you squint.

We’ve held the event there before, but late February in Palm Coast is one of the most pleasant times of year for us. This is especially true in the Hammock. If you’re wondering, that’s how we came to the choice.

But man, what a time it’s been, these last five-and-a-half-years. Over the course of our 50 events, we have seen a fantastic diversity of industries. We gravitate towards Web and tech Startups, but we get a little of everyone, including non-entrepreneurs. So please don’t feel scared to come…We all have a good time.

Here’s a general industry-by-Industry breakdown that we’ve tallied since we’ve been around.  Our data from this last event, independent of the chart to the left, shows we had individuals from the worlds of consultants, real estate, local politics, insurance, sea boat captains, venture capitalists, interior designers and more.

From that pool, we spoke to a sample of approximately 30 attendees. Here was the question of the hour: “How many of the 50 Entrepreneur Nights have you been to?

From that sampling, Phylis Moor, a local business broker with the Florida Business Exchange, led the pack.

According to Phylis, she’s been to 49/50; 98 percent. Not too shabby. She missed just one because of surgery, disrupting her “perfect attendance,” she said.

It can’t be just because of the free food. Phylis must be seeing a tangible benefit to her business. But because we wanted to get to everybody else, we didn’t get to ask her. Regardless, she gets the gold star.

Next came Heather Thompson, of HT Event Productions, with 40 Entrepreneur Night attendances; 80 percent. We recently caught up with her and learned something quite surprising. Heather was a very different person when she first started attending, she said.

“I came here and I was so nervous. I didn’t want to talk to anybody. I had all these fliers but I had to run back over to Farley’s and get a drink because I just couldn’t talk.”

Anyone who knows Heather today would find this assertion shocking. But the skills she’s picked up have been essential to her business and she’s continued to learn indispensable knowledge along the way. “Part of the problem before was that I didn’t understand the value of my knowledge and the value of my contacts,” she said. “I just wanted to connect people because it’s in my nature, but I finally realized I can put a value on it.”

So as you can see sectors don’t determine who is and is not an Entrepreneur Night loyalist.

Who will lead the pack when it comes time to celebrate our 100th Entrepreneur Night in another five-and-a-half-years? What will our northeastern Florida business landscape look like by then? Well, that’s up to all you entrepreneurs reading. You find far less anniversary types beginning with 100 than 50 in real life. That’s for sure.