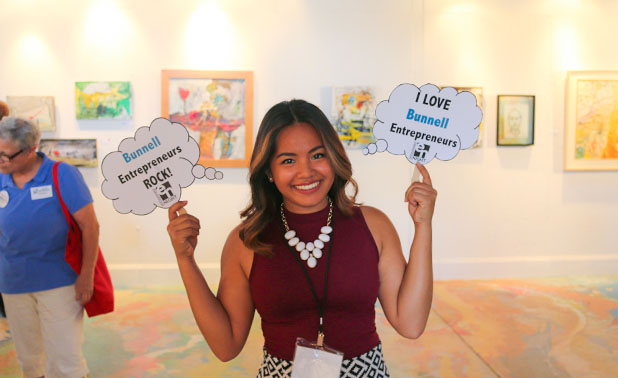 June’s Entrepreneur Night marked the last event of this summer.

On the last Tuesday of the month, you would have found a host of entrepreneurs, investors, and genuine supporters all tucked away on the side of HWY 100  – mingling at one of Flagler County’s greatest gems: Salvo Art Project.

Each and every person that attended the event had an interesting story to tell about their business – what they do, and why they do it. And the story behind Salvo Art is an incredible one.

From the paint splattered floors and handcrafted furniture, to the paintings that line the wall, it’s evident that this was a location made for artists by artists.

John Joseph Graham (better known as JJ) is the founder of this beautiful visual art gallery. Starting out as a restaurant manager in Nashville, Graham moved to Flagler and became one of the first artists to show in galleries other than the local wine shop, and sold enough of his artwork to match what he would’ve made in 5 months at the restaurant.

During his shows, all of his early work was purchased by collector Michelle Rue – giving him enough revenue to dedicate all of his time to making art. For the next six years, the Hollingsworth Gallery was Graham’s solution to not only continue painting for himself, but to develop a community of artists. In 2014, Hollingsworth Gallery left Palm Coast’s City Marketplace to nestle itself inside of Bunnell’s Nature Scapes under a whole new name.

You guessed it: Salvo Art Project

But he couldn’t do it alone. He met Petra, whose dreams were just as ambitious as his. It didn’t take Graham too long to find out that she was good at things that he was new at, and that he was able to teach her new things as well. They built the perfect partnership – both sharing a love for working with kids and art – and their dreams intermingled. So choosing a name wasn’t too hard.

“We chose the name Salvo because it could be a barrage, a celebration, or a volley of cannon fire. Being in a place where we’re on the outside perimeter of the art world: we like the idea that we can come here, be creative, and shoot that out to the world.”

But despite the fact that they were both motivated by sheer passion to start up Salvo and keep it growing, it hasn’t been smooth sailing all the way through. This was not an overnight business, and there were many times when JJ and Petra had to roll up their sleeves to get things done. Some months there was no need to break a sweat, and there were others when it was difficult to make ends meet.

With 80% of their studio rentals going toward rent, utilities, and building a second floor, keeping this place up and running can pose a challenge. Graham had a beautiful solution: “ideas.”He has created a total of 50 paintings – over four weeks of sleepless nights.

“It’s a series of paintings called the Builder Paintings and they’re called that because they have a job – and their job is to build out this place.”

Despite the fact that his pieces typically go for thousands of dollars, he’s selling these paintings at a very affordable rate – and it’s working! He’s raised about $9000 to put toward the construction of the second floor. But even though this idea is working, there was a significant amount of risk involved, as he could have spent all that time and effort and not have sold a single piece. So you have to take chances and hope they pay off, especially if you love what you do.

For Graham, his love is art – always has been, always will be. He appreciates art that’s outside the box, and tries to stay away from the whole “Florida Tourist Art Scene.” He not only teaches his students techniques and different art styles, but teaches them the value of what they’re doing.

“They’re gonna grow up, and then they’re gonna appreciate art, remember the experience they had, and they may not show up in money but they’ll show up in support. So, it’s quite an investment.”

At this point, the growth of Salvo Art is very organic. It’s able to pay for itself, it’s attracting more and more people every day, and is truly becoming a center for the arts.

JJ Graham is truly an inspiration for any entrepreneur – proving that no matter how hard it gets, follow your dreams.

“I followed where my art took me and this is where it took me.”

In this recap, we only wanted to feature Salvo Art (JJ and Petra) because of their own unusual entrepreneurial story. They have done a very difficult thing. Not only have they built an impressive structure for all things art, but they’ve also built an impressive community of artists and art enthusiasts. Doing all of this in an otherwise underprivileged and under served location (Flagler County) takes courage and knowing how to execute a good idea. But JJ and Petra were not only our hosts, but only two of the 200+ entrepreneurs at the event – some of them are featured in the video below.

Did you know: this is the last event before the summer break! The next one will be the 5th Anniversary of Entrepreneur Night (September 27, 2016 at European Village).