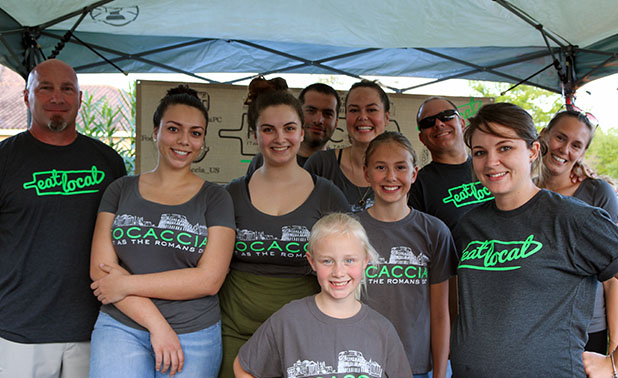 Do you eat to live or do you live to eat?

This axiom, one could say, is an alternative version of the question we were asking at March’s Entrepreneur night–a markedly different approach to the usual background probings of our normal entrepreneur interviews.

Maybe our inkling to lead this post with that particular phrasing has something to do with our choice of venue for that last Tuesday: The lovely Focaccia–the most unique pizza joint you’ll find in Palm Coast. Perhaps, even, we could extend that characterization to the greater continental US. It was our second time, and you know that means we like a place.

The young owners, Alex Tarantino and Dario Carbone, both 29, traveled all the way to Palm Coast by way of Rome, after all, bringing with them their authentic rustic countryside fare; quite the departure from the typical New York-style pizza you’re accustomed to finding here. (If you’re curious to know more about our pizza scene, however, check out This Best Pizza in Palm Coast post.)

Here’s the actual question we asked to the entrepreneurs on-hand that evening in more straight, less gustatory, terms:

What do you put first, Yourself or your Business?

You could see in their eyes, even if the individuals those eyes belonged to were in mid-pizza bite, that many had never truly thought in these terms before. We only gave each individual about thirty-seconds to a minute to respond, but real entrepreneurs should be able to handle that, no problem.

What’s even better is we weren’t only asking those entrepreneurs there in attendance. (We typically bring in entrepreneurs and small business owners from the circumference of just about 30 miles in any direction of Flagler County.) We also posed a near identical version of the question in a poll we tweeted from our Entrepreneur Night Twitter handle. So we hit the micro and the macro.

So how did our subsection fare against that larger diaspora within the greater United States? Though perhaps, “fare” is the wrong word, because this isn’t really a competition. It’s a question of perspective more than anything.

Here are the results of our Twitter poll of 236 votes. It proved extraordinarily tight. Our greatest participation it should be noted came from these 12 states: California; Florida; Maryland; West Virginia; Pennsylvania; North Carolina; Ohio; Texas; Arizona; Georgia; Washington and Massachusetts.

We didn’t allow choice C at our event and, strikingly, our vote tally from within our sample size of Ent Night attendees wasn’t nearly as close. It’s hard to say what conclusions we should draw from these findings–that local entrepreneurs valued the self (Though in many cases “self” didn’t necessarily mean “self”) so much more than those in the rest of the country.

At the event, but not in our Twitter poll, we also asked for an age range to see if that had any bearing on the answers we received. It seemed a greater incidence of those who would say self fell into the older category. It would seem that the way most of them see it, they’ve reached a point in their life where they want to take some time to smell the roses. Those who said business tended to fall among the younger crowd who seemed to be searching for their identity through their business.

Here’s the percentage breakdown. In the under 40s’ camp, we had 64 percent fall into the business camp; 33 percent in the self. For those over 50, it was 36 percent for business; 42 percent for self.

Here are a few quotes from both camps.

Becky has been one of Flagler County’s prized authors for some time. Now she’s starting a business to reach out to other people to help them tell their own stories, which is interesting in itself with regards to the context of the question.

“That may sound selfish, because I need to be healthy in body and mind to be of service to other people. The people who are really focused on business are always on the run. And yeah, they got this business going, they’re making millions of dollars, you just want to say stop–take care of you.”

Matt served in Afghanistan but was taken out of action due to an injury caused by an IED, which sent him back to the states. This fact sheds light on why, in the under-30 group, he was one of the few to actually go with self.

James, like Matt, bucked the trend we referenced above. Among the older group, he had no trepidation about going with business. In fact, he answered the question with the least hesitation of anyone asked.

“I wouldn’t have a social life or anything without my business itself. I mean that’s our income, it pays our mortgage and everything else…I enjoy doing what I’m doing. When you’re 59 years old, people dream about owning their own business and not working for somebody else. It pays the bills and everything else and at the end of the day that’s the most import thing to me I can go home to my family and relax and that’s the most important thing. But is it stressful? Oh yeah…”

Alina would like to say “self.” But their customers don’t necessarily allow that.

Here’s one interesting facet within the overall grouping: In a number of cases, regardless of how the person answered–self or business–the interviewee often offered a parallel rationale to someone who picked the contrary answer. For many, it seemed that the self and the business were two sides of the same coin. Either the business operated as an extension of the self or vice versa. And everything else followed from there.

There was one added, unusual aspect to the event which added an extra layer, one of special poignancy to the question. A week before Entrepreneur Night, we lost one of our own in Dave Dalecki, owner of Got Tools, passed away in a tragic car wreck. Dalecki was also the husband of Cindy Dalecki, founder of Marketing To Go, an inspiring entrepreneur in her own right as well as an ardent supporter of Entrepreneur Night.

In honor of Dave, to celebrate his life, we had a brief moment of silence in his name and released a few bright blue balloons into a clear Palm Coast sky to conclude the remembrance. If there’s any silver lining to sad turn of events like this one, it’s that it clues us in to the fragility of life and offers us a moment to contemplate what, at the end of the day, is truly important. What really comes first?

To end on a lighter note, we did ask the question to our dear hosts, Alexia and Dario, in case you were wondering. They answered in such a way as to honor the axiomatic form with which we began this post. To quote Dario:

“If you can’t sell pizza, you can’t do anything…”

Take from that what you will.