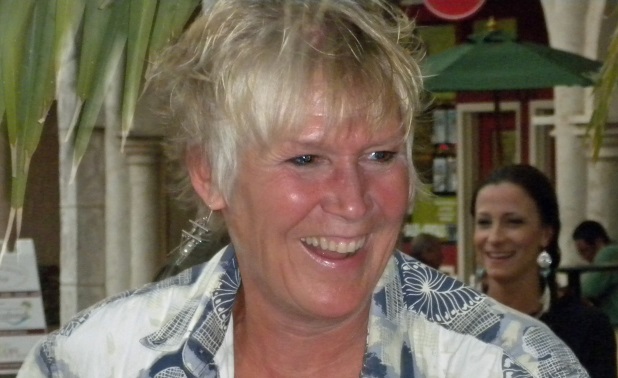 One thing was for sure, according to Kathryn Teiro, interior decorator for 727 Jazz, that “Grecian mural,” the one that used to hang on a Europa wall parallel to the Hammock Dunes Bridge, had to go.

Just about a month ago, 727 was still Europa, one of the welcoming storefronts in European Village.  Teiro, who’d recently moved here from North Carolina, was hired on short notice to give the storefront a “minor facelift,” and last Tuesday, under torrential-looking skies, it played host to April’s Entrepreneur Night.

“That mythology thing,” said Ray—Teiro’s husband—of the mural. “That didn’t belong in any restaurant that I ever went to.” For the meantime, this particular bit of Mycenaean décor has been replaced by a couple of vertical hanging mirrors, and she’s looking for some whimsical, likely expressionistic jazz themed paintings, says Teiro. The other cosmetic changes have also been minimalist, she says: a paintjob, some re-upholstery.

Teiro, who’d served a number of North Carolina Panther clients while she lived in Charlotte, wasn’t there to show off her work but was there Tuesday as a fellow entrepreneur. She moved to Palm Coast, she says, so Ray could enter semi-retirement and also because, with the area’s recent housing growth, the pair saw Palm Coast as a good place to springboard her business—Interiors By Kathryn Teiro. Teiro is currently giving 386, the popular intimate eatery located on North Oceanshore Boulevard (A1A), a minor makeover as well.

Sometimes it’s the small changes and knowing what you want that make all the difference. These were the conclusions drawn by Tiffany Burckhalter,  owner of Jazz 727, and also the former Europa.

In large part, change was needed because “the night life isn’t good here,” she says, after pouring a round of drinks. However, the near shooting had no bearing on the realization, she insists, adding that could’ve happened anywhere.

“I’d been looking for a change for a while now,” Burchhalter says. She knew something wasn’t clicking—that something else was needed but she needed help—help from someone with more experience in these types of endeavors.

“I was just waiting for the right person to come along, and here we are,” Burckhalter says. “I believe everything happens for a reason,” she says.

That right person was Frank Demaio, owner of 386. Demaio agreed to come on board after meeting Burckhalter at March’s Entrepreneur Night, which took place at the Hammock Wine and Cheese. Demaio, who’s been involved with restaurants virtually his whole working life, was the first person Burckhalter gave her card to, she says, and just like that, Demaio was 727’s restaurant consultant.

It was that same evening, that previous Entrepreneur Night, coincidentally, when it was decided that Entrepreneur Night would come to Europa; all in all, a testament to how quickly wheels can turn when business-minded people are brought together.

“I just thought it needed a facelift; everything needed to be redone, gutted, changed,” says Demaio, who was also pouring out drinks. Before, “It was dark, it was gloomy. It just wasn’t happening. It was the past.

“I thought it should cater to the upscale, the mature, the fun, sexy crowd. No drama. NO DRAMA,” Demaio says, making sure to emphasize this last bit. Europa’s age demographic had been from about 21 to 30, he says. The new one they’re shooting for is a slight generation up, 30 and over.

Wendy Roth, gallery director for the Flagler County Art League, coming directly from an art league strategic planning meeting, was a newcomer to Entrepreneur Night. She, too, was analyzing the direction of her organization , targeting what it is that the art league does and whether or not the league is meeting the goals of its mission.

“What better time to let people know about the Flagler County Art League,” she says of Entrepreneur Night, going on to hype one of their Celebration of the Arts programs—a free event, happening May 4 at the Hilton Garden Hotel. The Celebration events were sponsored by a Palm Coast city grant. The theme of one of the final wind-up programs at the Hilton Garden Inn is manatees and sea turtles, she says, featuring local conservationist Frank Gromling.

Asked about how art intersects with business, Roth has to ponder a moment.

Business should support the arts, because the arts actually in a way support business. People come to where there are arts. In many places, art has been the one thing that has restored neighborhoods.  For instance at South Street Philadelphia now you go into really classy restaurants and you see paintings on the wall.

Taking shelter under a neighboring Mezzaluna tent as a particularly intense cloudburst assailed the imitation European style rooftops, Dustin Savage, a new local business owner, was talking about the credit cards which he had “blown out of the water” in order to open his full service bike shop and the ice cream shop next door, a separate business. A road and bridge inspector by trade, Savage used to dread going to work everyday, he says. Then he was laid off for two-and-a-half years, which was how he got his feet wet in entrepreneurship.

Asked how he developed his business savvy without any business background, it was less scientific than it was “off the cuff.”

“You look for an opportunity; no—you look for a need and then fill it,” he says. “There were lots of bicycles around and nowhere to get them fixed.” Fortunately, he had the skill-set to take advantage, as he’s “very mechanical.” When it comes to the restaurant part, he had worked in some places as a kid, he says. That’s all.

Of course, it’s important to evaluate your business model, but when you open a business yourself for the first time, it may lead you to evaluate other things as well.

“I’m definitely aware of my mortality,” Savage says. “If this all fails tomorrow, it doesn’t matter, I’m having a great time with it. I’m having fun. It’s challenging. If I’m going to fail, this is the best way to do it.”

Alvaro Roa, originally from Columbia, and his wife Sandy are in the international import and export consulting business. Their business, RoaNet: Across the World, introduces small to medium-sized companies into the international market, offering two different services: making contact with international partners—if you already export, they just find a buyer. The other option, for those who don’t know much about importing and exporting, is to act as a distributor overseas.

A lot of folks are afraid of doing business internationally because of the regulations—if they don’t know about it—the taxes, or even folks afraid of getting ripped off by international buyers, which is pretty common.

It sounds very complicated, what the Roas do. Alvaro agrees that it sounds that way: “A lot of people do not want to mess with international business,” he says. “What they fail to understand is probably that 90-95 percent of the market share is outside the United States.” Globalization and the Internet, he says, make it much easier to do business overseas.  “Once you break it down, it’s easier to swallow.”

Alvaro, had only recently retired from the United States military, where he worked as a procurement officer at different US embassies around the world. It was his experiences working in these different countries that taught him how to avoid conforming to the image of the “ugly American,” which, he says, can be a true, business-thwarting stereotype. Part of his training was to teach him to understand the nuances of the different cultures he had to deal with, a skill set no doubt an asset to him now in facilitating business transactions.

One example: in Egypt, he says, you never want to sit with one leg crossed over the other, leaving the sole of the shoe exposed, because to be hit with a shoe in Arab culture is a worse insult than being called a “m—fffer,” he says. Again, often it’s the small things that go a long way. April 2014’s Entrepreneur Night attracted over 150 participants.  Melissa Henderson and Lisa Ekinci from Office Divvy were the MCs at the event with announcements.  Helga van Eckert from Flagler County Department of Economic Opportunity (a new official sponsor of the event) also saying a few words, and highlighting the upcoming Flagler County Job Fair on June 5th.

A video recap of the event is here: