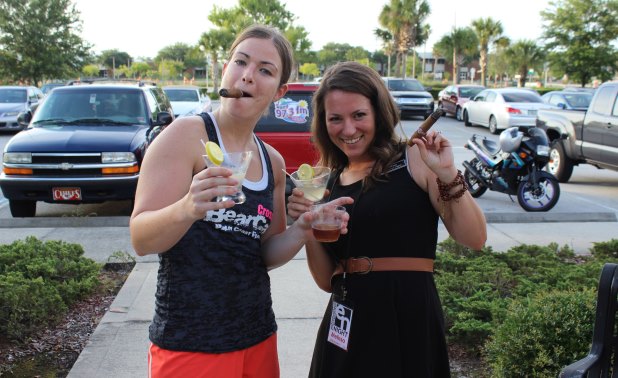 The special June 2014 edition of Entrepreneur Night was an invitation-only theme-event for 40 Under 40 —that is, 40 entrepreneurs all under the age of 40 were invited.

While Ray Peter of the Small Business Development Center (SBDC) wasn’t under 40, he did have just under 40 years business experience, he said at last Tuesday’s “40 under 40” Entrepreneur Night.

The event was held at COWORK by Office Divvy, located at 20 Airport Road, next to the Flagler County Chamber of Commerce. On a pleasantly warm Tuesday night, Peter stood, martini in hand, looking around at all of his relatively young contemporaries in a room decorated with bulging balloons—a detail that gave it the feel of a kid’s birthday party. It was the last Entrepreneur Night as the event takes a Summer break, and returns in September 2014.

“There’s nothing I’d do over,” Peter said, thinking back on his life and all his years of business. While he had no regrets, that didn’t stay his desire to lend perspective to all those potential younger selves on how they can move their businesses ahead faster, possibly avoiding pitfalls along the way.

The Palm Coast Small Business Development Center, (also known as Palm Coast Business Assistance Center (BAC), a non-profit run out of the University of Central Florida, which offers free services, looks to help businesses enhance their sales and marketing, build or examine their overall business plan, and analyze rivaling businesses’ numbers in different areas to see how one might improve.

While the event was tagged “40 under 40,” Lisa Ekinci, one of the founders, said that, especially in the digital era, age is not so important. You’re just as likely to come across a good idea from a high schooler as from an octogenarian.

“I’m excited if I just meet people who are doing stuff I didn’t know about here in town,” she said. But it’s important every now and again, she said, to do a special event that’ll call out a special group by name, which in this case were the under 40’s.

Office Divvy, a “business percolator” Lisa Ekinci co-founded, presents the Entrepreneur Night events, and they aim to do one themed event a year.

Many on hand were in some way involved with marketing. One such entrepreneur was Jason Reyes. He signed up for Entrepreneur Night on the event Meetup page. His creation, Breakout Marketing Concepts, is a marketing company. In addition, he has a mobile startup.

“Mobile is a big, big deal right now. Basically there’s 11 million companies in the United States that don’t have a mobile-friendly website and so basically my company helps businesses get mobile, get noticed through Google on a mobile platform which gives them visibility and credibility.”

At this particular Entrepreneur Night, Ky Ekinci passed around the microphone so the entrepreneurs could in essence play the one-minute name game. With a special shout-out to the Old Vienna bakery cookies they had on the hors d’oeuvre table, the first person he called was 21-year-old baker Anthony Datsko, one of the owners of the bakery which opened in 2013 and is located at 2323 N. State St.

Standing before the group, Datsko said, before getting into baking, he’d been in nursing school, but he hated the paperwork. With that realization, he told his father that he could cook for a living, but his father advised him against it. “Not in this area,” he told him. Besides, Datsko baked better anyway, he added.

At Tuesday’s Entrepreneur Night, practically the first thing Datsko said was that he was really tired. A baker’s hours: Datsko had been up since 1a.m. Later, sitting, with a cigar outside on a bench, as a black snake hustled by in the grass, he offered more detail, a more personal story.

Before he opened the bakery with his mother and step-father, Datsko worked as a homecare aid for the elderly. Datsko was extremely close to his two patients. Even though both patients were in their nineties, it took the baker by complete surprise when each suddenly passed. He got the news of the first while he was caring for his grandmother after she’d just suffered a stroke. Then the second one died—Datsko left the man sitting in his rocker one night, perfectly fine—“He was FINE!”—only to get the call the next morning that the man had passed. “When that happened, I died!” he said.

“It’s not the money and it’s not the hours,” he said of his reasoning for opening a bakery.

It’s also obvious that Datsko, likes working with his hands, too, which, if you’re baking bread is important. It’s true that both his former profession and his new one are both very hands on. The hours are similar too. But baking is an emotionally lighter profession and Datsko sensed that, while he has qualities that suit him for both, he was better off harnessing his energy in a different direction. He took a risk. You like to see that in a young entrepreneur.

One of the fun moments at the special edition Entrepreneur Night was the Twofie Shootout. A twofie is basically a two-person selfie.

Flagler County’s celebrity bartender Mark “Tikitender” Woods challanged Christie Hyde and Katrina Austin to a twofie shootout. Running against a 30 second time clock, the one who takes the most twofies wins. For the twofie to be valid however, both eyes and noses of each person in it must be in the frame.

The results have been disappointing for Mark: because he was bartending the event and making elderflower martinis to folks, his hands were all lemon-juicy and he could not even get his phone to swipe to camera mode; resulting in zero twofies. Katrina and Christie tied with 12 twofies each.

Here’s a video with moments from this event:

Entrepreneur Night takes its annual Summer Break in July and August.    We return in the Fall of 2014, with the following three events:

credits
This recap is written by Ezra Salkin, with minor edits by Ky Ekinci.   Photo and video by Amanda Vilay and Ky Ekinci.