May 27th Entrepreneur Night (RiverGrille on Tomoka in Ormond Beach on May 27, 2014) 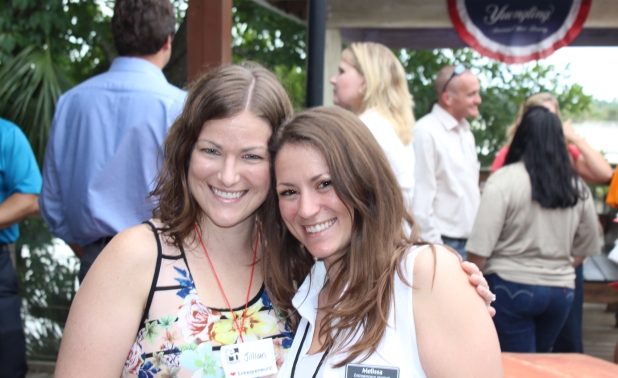 May 2014’s Entrepreneur Night was held at RiverGrille on Tomoka in Ormond Beach on May 27, 2014.  The event was attended by 133 Flagler and Volusia County entrepreneurs, investors, and supporters of entrepreneurs.

Richard Cooper, president of Mitchell Noel Insurance Agency, a regular at Entrepreneur Night, was a happy man at the last Tuesday’s Entrepreneur Night, held for the first time in Ormond Beach, at the RiverGrille. Drink in hand, surrounded by participants who now included people from the Ormond area, not just Flagler, Cooper reported on what he’s observed as our local economy’s turnaround.

“We get a lot of business from the construction, and we get a lot of opportunity from real estate transactions, so people are buying a home or a new commercial building, or are starting a business, that’s when our opportunity comes and we’re getting very busy,” says Cooper, who has offices in Ormond Beach and in Palm Coast.   He says “Small contractors are coming back to work. That’s a very good sign.”

To what does Cooper attribute this positive change? Folks are just tired of being down, he says.

“People are opening up their wallets. For whatever reason, people are feeling more confident about the economy and are willing to spend money again.   Entrepreneur Night is a great way to take advantage of the rising economy.”

Amanda Noyes is the owner and progenitor of Modern Organic Salon in Flagler Beach, which she opened three years ago. Noyes previously worked at a traditional beauty salon before she realized some of the more insidious and disguised health risks of the profession. After a year of reading blogs on the subject, she made the decision to open her own, all natural salon, a promising market niche growing 20 percent a year, she says.

She also had an Entrepreneur Night newbie with her, Sara Paone, who is also one of Noyes’ clients at her salon. The enterprise she was promoting Tuesday was all her own creation, one that could be described as a project of love, as there’s no real profit for her: the Flagler County Fun website, which she started in the summer of 2012. She manages to operate the site between working full time for Energizer and being a mother to two young children.

Flagler Family Fun, as the title implies, is a website geared toward families in Flagler, searching for family-friendly events. Paone was inspired to start it, because of all the naysayers complaining there was nothing to do here. “All those people talking about how they couldn’t find activities to do. There are so many free things for families, so I’m just trying to share that,” she says. As an exceptionally busy mother of young children, it’s a subject that’s close to her heart.

It was those same folks who made Paone realize she had a unique gift for this sort of thing, when co-workers and friends failed to find activities online themselves and then were amazed at the ease with which Paone would charitably get back to them with a fun activity idea.

“They said, it’s so easy for you to do that, you should be sharing it with other people. And I was like, ‘What a great idea!’  And my website now gets over 25,000 hits a month, and is growing.”

Noyes herself was one of those impressed, even as Paone sat in her beauty chair. “She was telling me all these places that she’s been and I was actually born and raised in Florida, and I was like, oh my God, all these places—I’ve never heard of!”

Consequently, her sense of adventure has grown from knowing Paone, though it was Noyes who alerted Paone to Entrepreneur Night. “Sometimes people need other people to motivate them,” says Noyes.

Jack Surrette, founder of Surrette Associates, LLC, a management consulting business, has lived in the Ormond area since he was six. He was one of the last operators of the locally owned Hawaiian Tropic, a company specializing in sun care products, before its 2007 acquisition. His consulting also works with such industries as pharmaceutical skincare, cosmetics, footcare, specialty petcare, and medical devices, among others.

From 2009-2012, he was the executive director of a start-up company that created products for difficult skin conditions but says he was happy to sell it because of the difficulty in marketing, almost door to door, typical of the dermatological profession.

Why? “I think they pay more attention to growing the small business circumstance,” or seed, he says, mentioning all the fiber-optics and technology that the city manages to bring in.

“Palm Coast and Ormond Beach are stronger together than they are apart.”

“I think it can draw people in because I think there’s a lot of people in Ormond who are very interested in this sort of thing, but they don’t really have a connection to it,” says Surrette referring to these types of networking opportunities. “I think they’ll go to Palm Coast and Flagler to visit, but I think Ormond Beach needs this sort of thing.”

Robert Wierschke is a realtor who sells property in Bolize Central America, with an office both in Flagler and St. Johns County. Currently, he’s developing 600 acres in an $800 Million listing.

Entrepreneur Night is the best of all these types of events, says Wierschke, who has cut out all others of its ilk. It’s because of all the different people who show up.

“It’s not like you’re seeing the same faces every last Tuesday. It’s different faces all the time.”

At most networking events, you’re stuck in a tight restrictive environment, usually at a table, not like the open, rustic deck at the River Grille, looking out onto the lush marsh landscape while the setting sun promises a soon-to-be soft summer night, “where you can mingle at your leisure.”

Wierschke been coming since day one, though with what he sells, he’s not likely to make many new clients. What he is able to do is give other realtors updates on what’s going on with Belize and schmooze with like-minded people.

After all, real estate hardly defines him. He gets bored easily, so he’s jumped around a lot, both in the enterprises he’s taken on over a lifetime of disparate professions. He’s led an interesting life. Perhaps his personal highlight, even more than being named Entrepreneur of the Year by SCORE—a nonprofit dedicated to helping small businesses get off the ground—was taking part in the capture of Ted Bundy, the notorious American serial killer of the 60s and 70s, when he was police officer in Pensacola.

A video recap from the event is here: